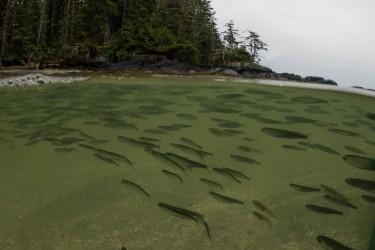 Skeena River salmon all depend on healthy ecosystems, and Flora Bank in the Skeena estuary provides some of the most critical habitat for juvenile salmon. Petronas, a Malysian-owned corporation, is proposing to build a massive LNG transport facility with infrastructure spanning onto Flora Bank. According to world leading scientists the construction and operation of this facility could destabilize Flora Bank and degrade salmon habitat.

The Tsimpsean people have occupied Lelu Island on B.C.'s North Coast in order to protect it from the massive Pacific Northwest LNG proposal that threatens the salmon habitat that is the lifeblood of the Skeena River. They have occupied their traditional territory and are living on the land, witnessing the attempts by Petronas and their contractors to test drill and survey this sensitive salmon-spawning estuary at the mouth of the Skeena. On average between 3 million and 10 million adult salmon return to the Skeena River each year.  Based on a 1% survival rate (which is common), this means that between 300 million and 1 billion juvenile salmon attempt to leave the Skeena River each year, most of which will eventually reach Flora Bank.

Watch this video by SkeenaWild to learn more about the First Nations that are occupying Lelu Island, and this video about Skeena River Salmon.